Episode 7: Election Crimes are not Being Prosecuted

Episode 7 of Protecting Your Vote details the important problem of county prosecutors not perusing election crimes.

People often point to the low number of election crime prosecutions as evidence that there is little to no voter fraud in the U.S. There is a major problem with this talking point. County prosecutors more often than not do not act on criminal referrals they receive from supervisors of elections.

The Foundation released a new report, Safe Harbor, that documents this problem in Florida’s big counties. We found 156 referrals from nine county supervisors of elections about potential criminal election law violations. Not a single one of these referrals was prosecuted.

Governor Ron DeSantis has a solution to fix this problem. He has proposed giving state government officials a concurrent power to prosecute election crimes. This will provide a check and balance to the failure to enforce the law by county officials. 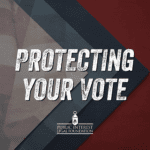 Protecting Your Vote
Episode 7: Election Crimes are not Being Prosecuted