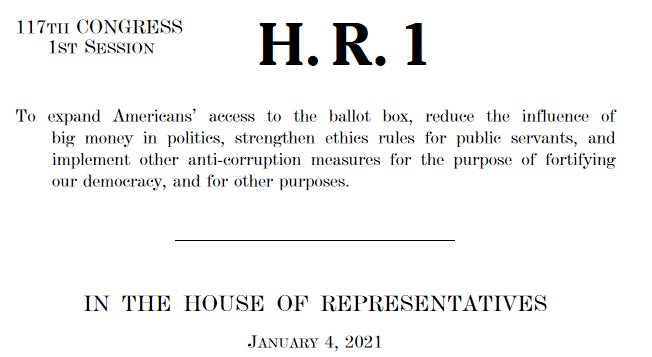 (WASHINGTON, D.C.) – March 3, 2021: Today, the House passed H.R. 1 — a bill that claims to make our election systems more secure but does anything but. This extremely partisan bill will make our election system less secure, fraud more difficult to detect, and easier to commit. This bill must not pass the United States Senate. Otherwise, America will experience the 2020 election failures on steroids in 2022 and in all elections moving forward.

Some of the bills most egregious actions are listed below:

President of the Public Interest Legal Foundation J. Christian Adams condemned the bill “as an attempt by the left to nationalize the worst election practices from 2020.” He said, “this is a recipe for voter fraud and corrupting voter rolls by requiring the automatic registration of all individuals resulting in illegals being registered to vote. This is sadly just one bad provision of many in this atrocious bill.”

He added, “instead of discouraging fraud, this bill encourages it. This is the exact opposite of what we need after 2020. The most fundamental right in a democracy is the right to vote and elect leaders. If Americans don’t have trust in their election systems, then our most basic freedom is in jeopardy. We must take actions so that Americans can trust their election systems and unfortunately this is far away from that. The Senate must not pass this bill.”

The Public Interest Legal Foundation won the only injunction against a state in 2020 in stopping the acceptance of late ballots without postmarks. PILF is leading the nation in enforcing election integrity laws and the National Voter Registration Act, having brought cases in North Carolina, Pennsylvania, Michigan, Maryland, Florida, Mississippi, Texas, and Maine and filed amicus briefs in litigation across the nation.